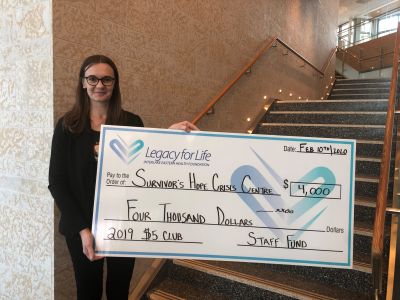 Interlake-Eastern RHA staff contributed $14,500 to five organizations that benefit residents from across the region. The Five Dollar Club is the Interlake Eastern RHA’s staff-led, corporate giving program where staff voluntarily contribute five dollars through payroll deductions. The recommendations were generated and voted on by Five Dollar Club members. This fund is managed by the Interlake Eastern Health Foundation.

“The SARAH Program at Survivor’s Hope is the only rural sexual assault crisis response program in Manitoba and we are honoured to have been nominated and to receive funds from the health foundation. We are excited to use the funds to train new volunteers for our SARAH program as the need for this service continues to grow each year,” says Stephanie.

On February 26th, Maxine Meadows and Larissa Webster from Child Nutrition Council of Manitoba and Corrie Cole, Executive Assistant to the CEO and $5 Club member celebrated a $4,000 donation from the $5 Club. The Child Nutrition Council of Manitoba is a charitable organization dedicated to helping school children learn, grow, and succeed by supporting breakfast, snack, and lunch programs. They’re unique because they’re based in Manitoba – and all of the funds raised stay in this province, reaching children in all regions of Manitoba.

Larissa Webster, Chair of the Child Nutrition Council of Manitoba shares on the importance of meal programs in schools:

“School breakfast, snack, and lunch programs mean so much to so many students who come to school without having had enough to eat.  It’s important that all students have equal footing when it comes to learning in school and having the best chance at success.”

Corrie Cole, Executive Assistant to the CEO and nominator says the council is important to children giving them the best chance to succeed. “This organization is dedicated to providing and ensuring our youth receive the best chance to learn, grow, and succeed. Providing a contribution to the $5 Club promotes a feeling of happiness, knowing that my charitable donation is helping and improving different health care initiatives in our region.”

On March 27th, Nova House staff acknowledged the donation of $3,000 in support of the women’s shelter.

Executive director of Nova House Viktoria Westgate says generous donations like this allow them to make changes to the shelter that fall outside of the budget. “We will use this money to provide a child safety closure at the start of one of our hallways which will prevent small children from running towards the stairwell. This donation helps our shelter with the costs involved in making these kinds of changes without having to dip into other parts of our budget. We are so grateful to the $5 Club for choosing Nova House as a recipient of this donation.”

“As part of working to address the sexually transmitted and blood borne infection outbreak, Public Health is involved in doing outreach to vulnerable people and families across Interlake-Eastern RHA. We would like to be able to provide warm hats, mittens, blankets, bottled water, and instant oatmeal to families that have young children. Using funds from the $5 Club would assist in funding these items for those living in poverty while we are doing outreach,” says Maxine.

The $5 Club also funded the purchase of an AtmosAir 25 pressure reduction mattress for the Lac du Bonnet personal care home. This mattress delivers reactive pressure redistribution at a constant low pressure even when transporting a patient or during electrical power outages.

Brenda Rose-Wiebe, Clinical Team Manager in Lac du Bonnet shares the importance of this mattress for residents. “This mattress will greatly benefit residents who are palliative or who have a complex pressure wound – thank you $5 Club.”

For more information on the foundation or the $5 Club please visit www.iehf.ca or contact Pamela McCallum, executive director of the Interlake Eastern Health Foundation at (204) 785-7044.