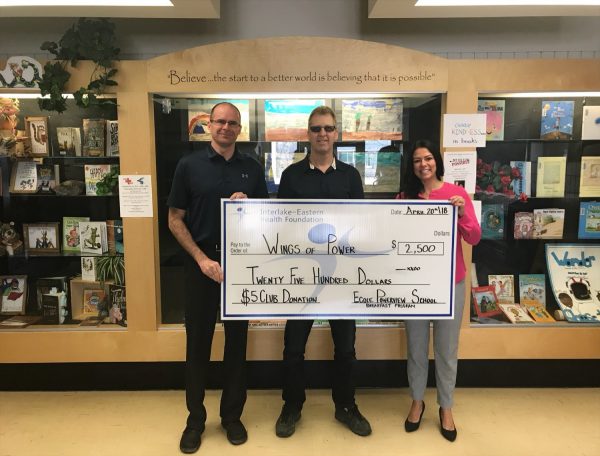 The Interlake-Eastern Health Foundation in conjunction with Wings of Power celebrated the donation of $2,500 in support of the breakfast program at Ecole Powerview School. The $5 Club is the Interlake Eastern RHA’s staff-led, corporate giving program.

“Wings of Power greatly appreciates the $2,500 donation we received from the Interlake Eastern Health Foundation’s $5 Club towards our Ecole Powerview School breakfast program. As a non-profit organization we rely on continued support from our community, local business and organizations.”

Lauralou Cicierski, regional manager of public relations and communications is proud to be a member of the employee-led $5 Club and recommended Wings of Power for funding this year. The $5 Club is the RHA’s corporate giving program where employees donate $5.00 from every pay cheque towards community health causes of their choice.

“Last year’s AGM was held at Powerview School. When we were tidying up after the meeting, we asked where we could donate leftover food. It was then that we were advised that the school had a breakfast program because so many children were coming to school on empty stomachs. We noted then that this would be an excellent way for Interlake-Eastern staff to contribute to the wider benefit of this community through our $5 Club,” Cicierski said.

Trevor Reid, École Powerview School principle says “the healthy snack program at the school is an essential part of helping students get the needed nutrition that is not always available to them elsewhere. Removing hunger helps keep the focus on learning and this donation from the $5 Club will have a significant impact on meeting the needs of our students.”

“This donation will fund the breakfast program in Pine Falls for an entire year. Our staff should be very proud of this achievement,” McCallum said.