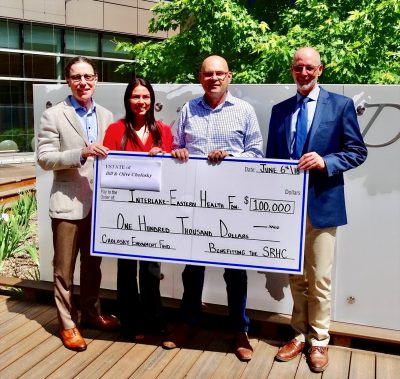 The donation was set aside for the hospital as part of the estate of long-time Selkirk residents, Bill and Olive Cholosky. Presenting the endowment on behalf of his Uncle and Aunt, Brent Wynnyk (who is also a board member of the IEHF), said that his Uncle Bill attributed his success in life to the town of Selkirk and the people that he served for many years running the Quality Store. This community devotion also extended to the Selkirk hospital, where his uncle said that he and his wife both received care that was “second-to-none” during their own stays there as patients.

“He always commented on how wonderful the staff was and how lucky Selkirk was to have such a wonderful facility. As he watched the construction of the new hospital from his room at the former Selkirk District & Regional Hospital, he often commented on what a great facility it would be when it opened and how many people of Selkirk it would help long after he was gone.”

Ron Janzen, Vice President of Corporate Services (IERHA) and Chief Operating Officer of the SRHC, was on hand to gratefully accept the donation on behalf of the SRHC and the Interlake-Eastern RHA.

“The Selkirk Regional Health Centre is deeply grateful for this generous support from the Cholosky family.  The establishment of an endowment fund is like the setting of a cornerstone in a buildings foundation.  This gift will be the cornerstone around which a philanthropic foundation is formed that will sustain and nurture our regional health centre for decades to come.”

It is community-centered donations like this that continue that show how much our residents care about improving and giving back to health care. Pamela McCallum, executive director of the Interlake Eastern Health Foundation echoed this sentiment.

“This gift creates a legacy for the Selkirk Regional Health Centre that will last a lifetime. Patients will see benefits from enhanced care and staff will see differences in their work environments. We are incredibly grateful to the Cholosky’s for establishing this fund and to Brent for seeing their wishes through with such integrity.”

For more information about this and other donations to health care in our region, contact Pamela McCallum at pmccallum@ierha.ca or visit the foundation’s website at www.iehf.ca